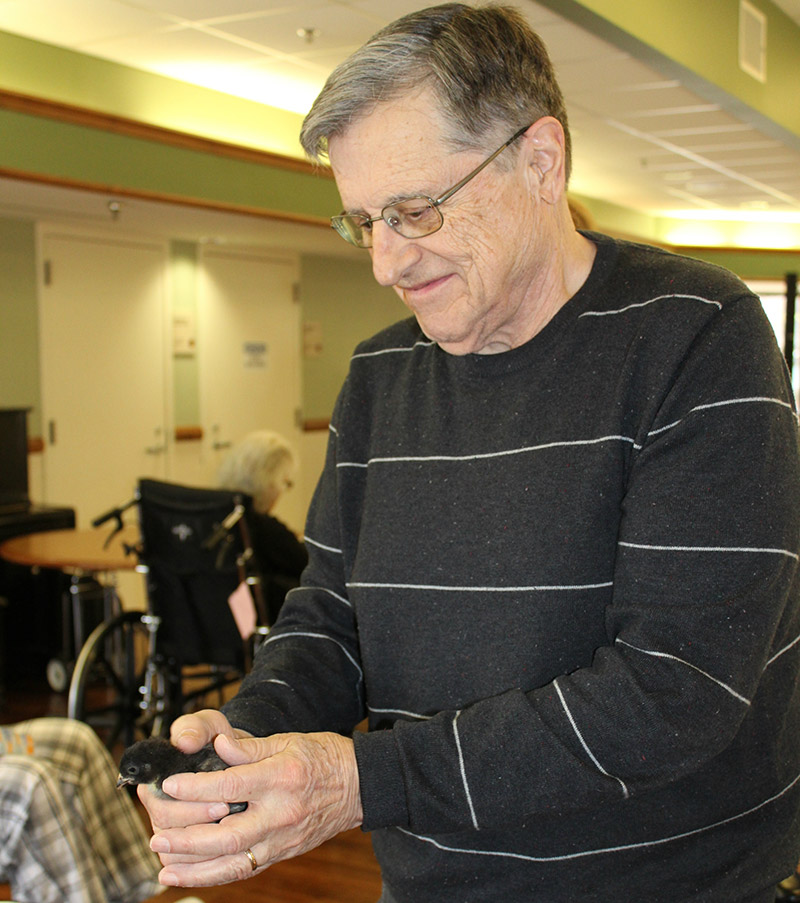 When people ask Dick Ruffolo which came first, the chicken or the egg, he can properly answer. That’s because, since the resident of Friendship Village senior living community in Schaumburg was a child, he’s been interested in chickens and all things animals, particularly the farm variety. (The egg came first, according to Ruffolo, because animals were laying eggs long before birds existed.)

“I spent hours looking at the Sears agricultural catalog as a kid. I read all I could about chickens,” said Ruffolo, who as a young boy growing up in Chicago raised chicks before the practice was popular in urban environments. If the birds happened to be roosters instead of hens, he wasn’t allowed by law to keep them because of the noise violation.

At Friendship Village, where Ruffolo and his wife Nancy moved from their Mt. Prospect home two years ago, residents spent the Easter season watching green and pastel eggs give way to some unusual chicks. Last year, Ruffolo brought in eggs and an incubator; this year, the community purchased a high-efficiency incubator to hatch the uncommon egg breeds Ruffolo ordered from Iowa.

“It was nice to have baby animals here; people just loved it and would check on them two or three times a day,” he said. “I am very grateful that Friendship Village got behind this project and supported it with the proper equipment and such enthusiasm.”

After a few weeks at Friendship Village, the chicks went to live at his son’s house. Dick hopes the roosters in the bunch will find their way to Heritage Farm in Schaumburg, where Dick has been a volunteer guide, animal caregiver and teacher to local school children for more than 20 years.

Part of primary age students’ experience at Heritage Farm includes a book Ruffolo wrote several years ago about a baby chick he and his wife named “Henrietta,” their endearing “baby” who spent most of her time on their shoulders. There was only one problem, however: Henrietta was a “he.”

“Henry started to crow!” said Dick, inspiring him to write a book called A Proper Home for Henrietta about the chick’s journey from the Ruffolo’s home to a place that could keep a rooster. While the book was never published, Dick is happy it’s been shared with so many students over the years.

Exposing youngsters to the marvels of nature has been Ruffolo’s passion since he studied elementary education at Northern Illinois University, one of the first institutions to introduce outdoor education. A retired elementary teacher, principal and curriculum administrator, Ruffolo made considerable efforts to include the Great Outdoors in students’ instruction.

“I made it my pet project,” he said. Still today, in addition to his work at Heritage Farm, Dick gives presentations at Friendship Village about chickens and dogsledding. A dogsled enthusiast for the past 30 years, Ruffolo went as far as Anchorage, AK, to be an “IditaRider” in the Itidarod’s annual fundraiser.

Beyond the world of animals, Ruffolo volunteered five years of his time caring for premature babies of drug-addicted mothers after he retired 28 years ago. He and Nancy are also world travelers. “She’s been a good partner with me on some crazy adventures!” said the fit senior who, along with his brother Tom (also a Friendship Village resident), has won medals in the community’s annual Silver Games competition. “We don’t travel as much as we used to, but it’s great that there’s so much to do right here at Friendship Village.”

While Dick and Nancy’s lives have been filled with creatures great and small, currently their only pet is a very friendly Siamese cat. “Most cats hide when visitors come, but he comes out to greet them,” said Dick. With owners like the Ruffolos, perhaps he’s learned that people are a really good thing. 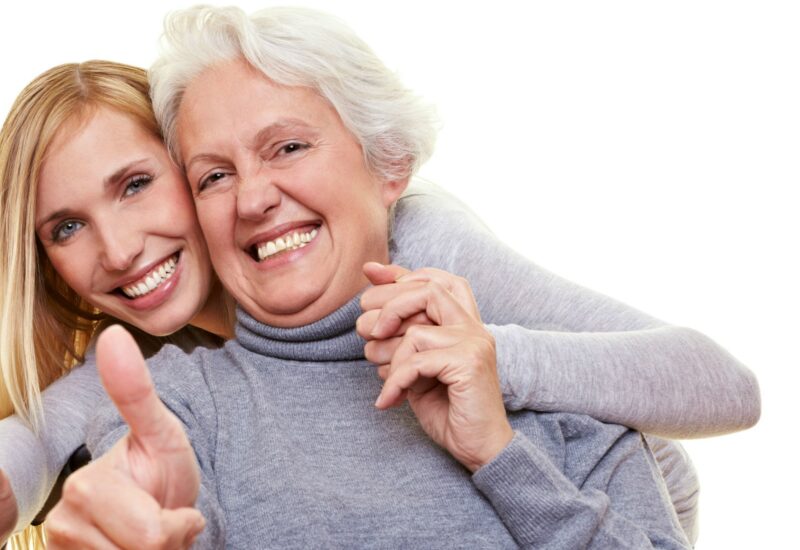 No Fooling-Laughter Really is the Best Medicine!